One of the best sources I use for finding retro recipe inspiration is from vintage brand advertisements. And, since I (tragically) don’t possess an endless personal library of such material, I often turn to the internet for resource. Nine times out of ten I end up on Pinterest. I never really valued the site much before I started my blog even though I’ve had an account for almost a decade (like most other women on the planet) but now I’m finding that I use it in a more productive “research” way rather than just saving pictures of exotic places I will never go and clothes I can’t afford.

I do have one big Pinterest pet peeve, however, and that is poorly linked images (i.e. recipe thumbnails that link to nothing, images that should link to a specific page but instead link to the homepage of that website, etc.) So, imagine my dismay when I stumbled across this gorgeous vintage Valentine’s Day cake, only to find it linked to a Pop Sugar article with the caption “How to feel bloated on Valentine’s Day — so romantic!” Umm… what could be more romantic than eating an entire cake with your one and only and then coming to the unspoken, gentle acceptance that the two of you are just going to watch Netflix and be very full, together. That’s true love, people! 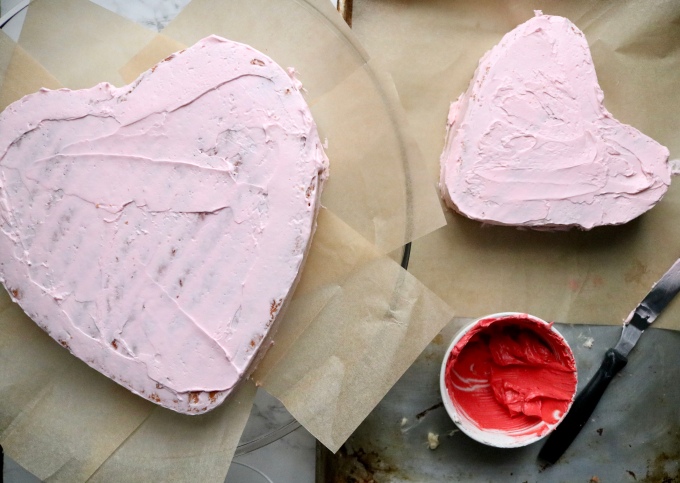 The aforementioned article (I should give it some credit, at least, since it lead me to this image) doesn’t list a source for the image but I could make out from the actual advertisement that it’s from February 1953 and published in “Julia Lee Wright’s School for New Cooks”. The cake’s description reads “Clad in swirls of delicate pink frosting and boasting a heart of spicy red-cherry filling, this Sweet-heart Cake is a sentimental way to court the favor of your valentine”. It also includes instructions for assembly: “Write a message to your valentine in red DECORATING FROSTING using a cake-decorating set. Or make Dan Cupid’s arrow with red cinnamon candies. Outline layers with candies, using tweezers to do it neatly”.

What is not included in this image, sadly, is the actual recipe. The cherry reference, however, was enough to convince me to use my  Maraschino Cherry Cake  recipe that I adapted for a different retro cake recreation last year. I disregarded the spicy cherry filling which I’m kind of kicking myself for but I was a little pressed for time this week. I’m thinking that I’ll revisit that at some point when I have some free time *laughs maniacally*. I also disregarded the cherry candy part because a) I couldn’t find any that were the appropriate size and b) I don’t have kitchen tweezers and I thought borrowing them from my bathroom would be, shall we say, questionable. It all worked just as well, though, because I ended up using the same icing for the writing to pipe the little hearts which gave me more control and took no time at all. 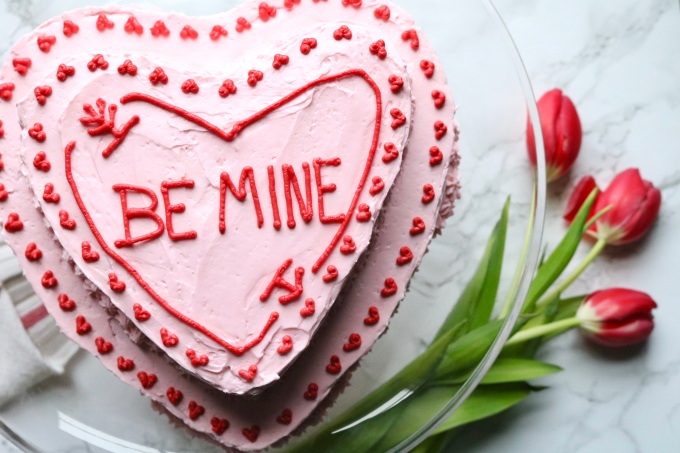 I also want to mention Julia Lee Wright who, while not exactly a household name now (just try googling “Cooking” and “Julia” together to see who gets top billing), but from the little information I found of her it seems she was quite the figure in her own right. She was a prominent home economist (how do I get that job?) and was the director of the homemaker’s bureau for Safeway Foods. An article from the Ogden Standard-Examiner dated May 10, 1942 advertises her “state accredited, free Victory cooking school at the Orpheum theatre” which, it seems, was part of a larger tour sponsored by Safeway with aims to support the war effort at home. The article also states that Julia graduated from the University of Washington in 1923 and after conducted “…hundreds of cooking schools throughout the western states, met people, gathered new ideas–always in the quest of knowledge.” I could find no mention of “School for New Cooks”, the publication in which this Sweet-heart Cake appears, but I did find a 1934 pamphlet entitled “Kitcheneering” and another, wonderful presumptuously named “Recipes You’ll Enjoy”. 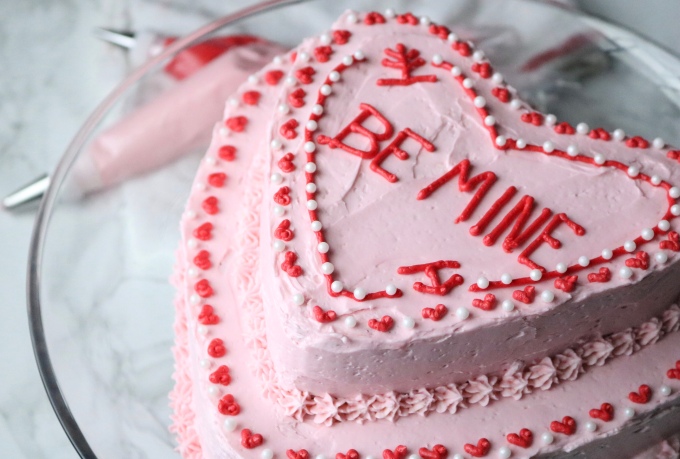 Preheat oven to 350°. Grease and flour two heart-shaped cake pans* and then line with parchment paper. Cream sugar and butter in the bowl of an electric mixer fitted with the paddle attachment until well combined. Add eggs and beat for a couple minutes until the mixture is light and fluffy. Mix in vanilla and sour cream until combined. In a measuring glass, combine milk and maraschino cherry juice. In another bowl, sift together 2 1/2 cups flour, baking powder and salt. Alternate adding milk/cherry juice and dry ingredients to the mixing bowl, beginning and ending with the dry ingredients. Toss chopped cherries in 1 tablespoon flour and fold into cake batter. Divide evenly between pans and bake 35-40 minutes until a toothpick inserted in the center comes out clean. Let cakes cool slightly and then invert onto wire rack to finish cooling.

*You can also use two 8-inch or 9-inch round cake pans and cut them into heart shapes by trimming around the edges. The cake will just have a slightly different height and shape.

In a stainless steel bowl (I just use the 5-quart bowl of my stand mixer), combine egg whites and sugar. Mix together and place the bowl above a saucepan of simmering water on the stove. Stir near constantly, until all of the granules of sugar have dissolved (you can tell by rubbing the mixture between two fingers–there should be no grit). Once the sugar is dissolved, transfer the bowl back to the stand mixer fitted with the whisk attachment and beat on high for about 10 minutes, until stiff peaks of meringue have formed. Switch out the whisk attachment for the paddle attachment and beat the butter in, two tablespoons at a time. The mixture may look curdled about halfway through, that is normal just keep beating. Once all the butter is added and the mixture is smooth, add in a pinch of salt and the vanilla and almond extract. Beat until well blended.

Trim one of the cakes so that it fits on top of the other in a concentric pattern. I really just eyeballed this. Thinly frost the cakes separately, then place the smaller cake on top of the larger cake. Go back in after the cake is assembled and apply a thicker layer of frosting all the way around the cake.