How is it October?! I’ve been so busy lately doing very boring/but kind of exciting/but still pretty boring adult-ing things that I almost let this month pass without a new Halloween recipe. Unacceptable. I hope this cake makes up for my recent lack of content with its cuteness, and I promise there will *fingers crossed* be a couple more exciting things happening around here before the end of the year.

But back to this cake. I’ve had this pinned for a while as the perfect candidate for what I’ve come to think of as a “retro recreation.” The original was printed in a 1956 recipe booklet produced by Baker’s brand called Baker’s Coconut Cut-Up Cakes. And don’t worry, I’ve already added it to the list of cookbooks that I absolutely need but have absolutely no room for.

A lot of times I spend weeks or even months sitting on a recipe, trying to work out all the logistical and creative decisions ahead of time so that it runs as smoothly as possible on execution day (a fun day for me, I promise!). But I have to admit I struggled with this cake, never landing on quite the right version in my head. And then I ran out of time, the date I had scheduled for this project was imminent so my choices were to cancel it completely or do something I rarely do: fly by the seat of my pants. 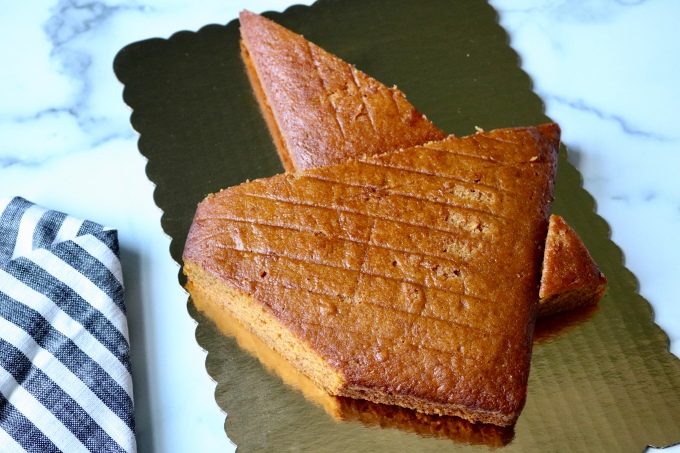 I chose the latter, thankfully, and I have to say I found it kind of liberating (or as liberating as cake can be). It was nice to spend a morning mixing up different colors and making decisions on the spot. It was, dare I say….fun? Blogging my baking projects is so creatively fulfilling for me but it can admittedly seem like another job sometimes, thinking up projects, executing them (I like this word, sue me), promoting them on social media, etc. Since my life has been very full-on lately my little blog is sort of having to take, if not a back seat a side seat, which I have to be okay with. And actually I’m feeling a little more than okay with it right now because it is serving its purpose to me, providing me with little breaks of time where I can go completely crazy in the kitchen, get lost in a process, have FUN, before I leave to go back into that crazy scary world out there. Witches and all ( ; 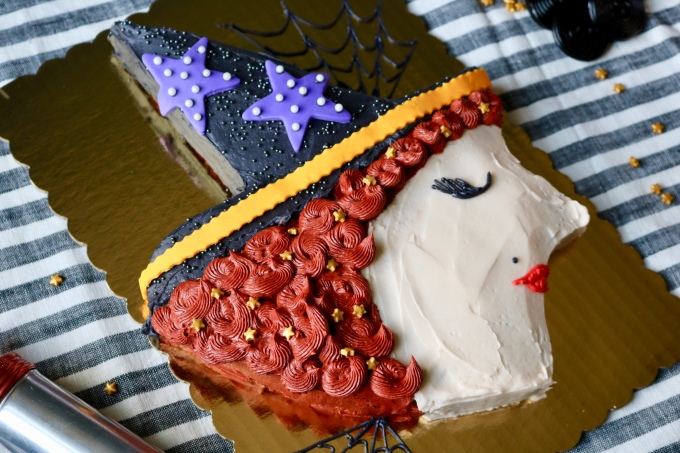 Preheat oven to 350°. Grease and flour 8 or 9 inch square pan. In the bowl of an electric mixer fitted with the paddle attachment, beat together eggs and sugar on medium speed for a minute or two. Add oil and pumpkin and continue to mix until combined. In a separate bowl combine flour, cinnamon, baking soda, baking powder and salt. Add all the dry ingredients into the mixer and mix just until the flour disappears. Pour into prepared pan and bake for 25-30 minutes, until a toothpick inserted in the center comes out clean. Let cake cool for several minutes in the pan, then run a knife around the edges and invert onto wire rack to finish cooling before icing.

In the bowl of an electric mixer fitted with the paddle attachment, beat together butter and powdered sugar until smooth. Add in vanilla and cream and beat for another couple minutes until the mixture is thoroughly combined and fluffy. Divide the frosting into 4 bowls in roughly these amounts: Dye the largest portion black, the second largest portion reddish-brown (or whichever hair color you prefer), the third largest portion whatever skin tone you’d like, and a small amount red for the lips. I also used a bit of store-bought fondant to make the stars and band of the hat.

The measurements for which to cut the cake can be seen in the original image but you can adjust those measurements so that the cake fits your platter (I had to make my “hat” a little shorter) or if you want a more petite nose like I did for my glamour witch.